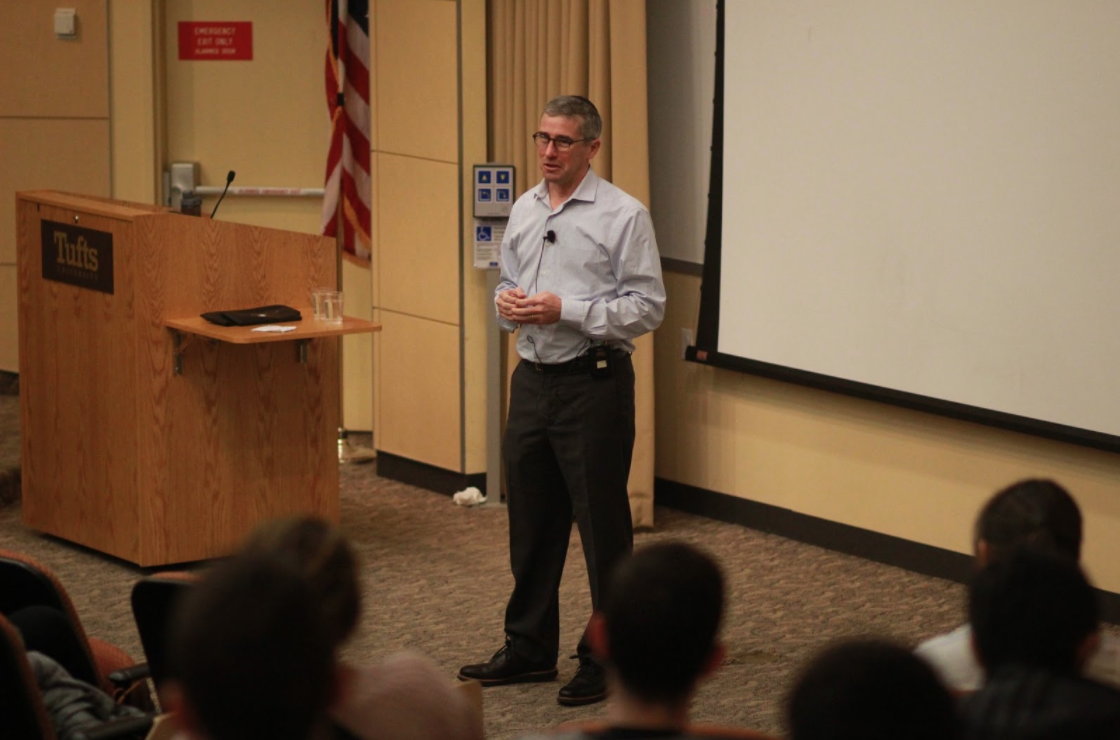 Thirty years after celebrating Israel’s 40th birthday as a Tufts freshman, alumnus Michael Granoff, founder of Maniv Investments, returned to the ASEAN Auditorium on Wednesday, March 14th to present on behalf of the Tufts TAMID chapter. During the event, titled the Fourth Industrial Revolution, Granoff shared his past experiences and his future vision in the world of clean energy and autonomous vehicles to an audience of over one hundred members of the Tufts community.

While Granoff currently views mobility services and vehicle automation as the future of global transportation, his initial focus was on the electric economy when he entered the industry in 2003. He considered the United States’ dependence on foreign oil imports as a national security weakness, and furthermore, as an incentive to develop a new transportation system based on electric vehicles. However, finding a successful business model to produce electric cars proved to be a significant challenge. For several years, Granoff worked alongside entrepreneurs Shai Agassi and Elon Musk, two industry pioneers with strikingly different approaches to electric vehicle production. With his company, Better Place, Agassi sought to introduce electric cars through a network of stations where drivers could swap drained batteries for charged ones, but he sent it into bankruptcy when he pushed for expansion before establishing a sustainable cost structure. Meanwhile Elon Musk, founder of Tesla, entered the market by creating his own electric car company, which has been successful among wealthy, elite consumers but is still working to target middle class car-owners.

Though electric vehicles have not yet revolutionized the automotive industry as he initially envisioned they would, Granoff has remained optimistic towards the future of clean energy-based transportation due to the onset of unforeseen technological developments. Citing the famous quote, “data is the new oil,” Granoff emphasized the crucial role of data analytics in the future of transportation systems. He pointed to vehicle-to-vehicle communication, automated driving, and ridesharing services, technologies that are increasingly being implemented in modern cars, and stated that these data-based technologies will comply best with electric vehicles. So while the direct transition from oil to electric-based vehicles posed many difficulties in the past, the rise of automation will give way to the electric age, according to Granoff.

Granoff also noted that the electric mile is becoming increasingly cheaper than the gas mile. He predicts that this change will result in a vast increase in total mileage, but that it will also allow for equitable pricing on transportation that is based on congestion rather than distance. Ultimately, the scarcity will be in the road space, not the cost of mileage. By 2030, Granoff estimates, automated miles will exceed driven miles and most miles will be driven by fleet-owned cars rather than self-owned cars.
Despite the economic feasibility of the upcoming electric age, both audience members and Granoff himself have questions about its implementation. Granoff pointed to the human appetite for auto-ownership, and students mentioned issues such as cybersecurity, ethics, and job loss due to automation as potential obstacles. However, Granoff remains optimistic that current and future startups will tackle issues with ethics and cybersecurity, and that technological development will be accompanied by job creation that will make up for the loss of unskilled jobs. He avows that automation is inevitable, and that oil will no longer have a monopoly in the future.

Throughout the event, Granoff underscored the pivotal role that the Israeli startup scene plays in the emerging market for electric and autonomous vehicles. Fourteen out of the twenty companies in his company’s portfolio are Israeli, and they’re all developing crucial technologies for the automotive industry. As an example, Granoff pointed to Phantom Auto, an Israeli startup that aims to help autonomous vehicles deal with unpredictable situations by transferring their control to employees in Phantom Auto offices. Additionally, he mentioned the newly-implemented fleet of automated taxis in Tel Aviv. Israel’s embrace of the autonomous vehicle revolution has been widely successful and holds potential to significantly influence cities around the world.
Reflecting back on Wednesday night the Tufts TAMID chapter ultimately views the Granoff event as a strong success, as it drew a large number of students and fostered engaging discussion with several perspectives. David Shephard, co-founder and co-president of the Tufts TAMID chapter, believes that “Granoff’s story, which he graciously shared with us, serves as a strong affirmation as to TAMID’s central values of deriving knowledge from Israel’s brilliant, innovative economy, whether it’s in tech, clean energy, or self-autonomous vehicles, to get a glimpse into the future of a country producing successful startups at an unprecedented rate.” Moving forward, our chapter aims to continue to further unite the Tufts community in discussing the power of finance and technology in solving global issues. 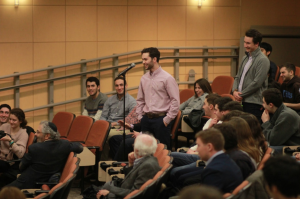 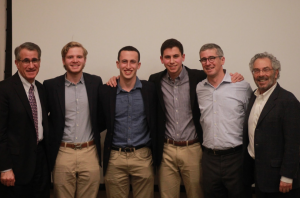